Morocco is well-known for its rich culture and fascinating history, its bustling cities such as Marrakech, Fez, Tangiers and Agadir, its delicious food and unique tourist attractions. What is less well-known, perhaps, is the diversity of Morocco’s landscapes, waterfalls, beaches and desert which make it one of the world’s most beautiful countries. Here are just a few of the awe-inspiring landscapes that Morocco has to offer for those willing to step off the beaten track. 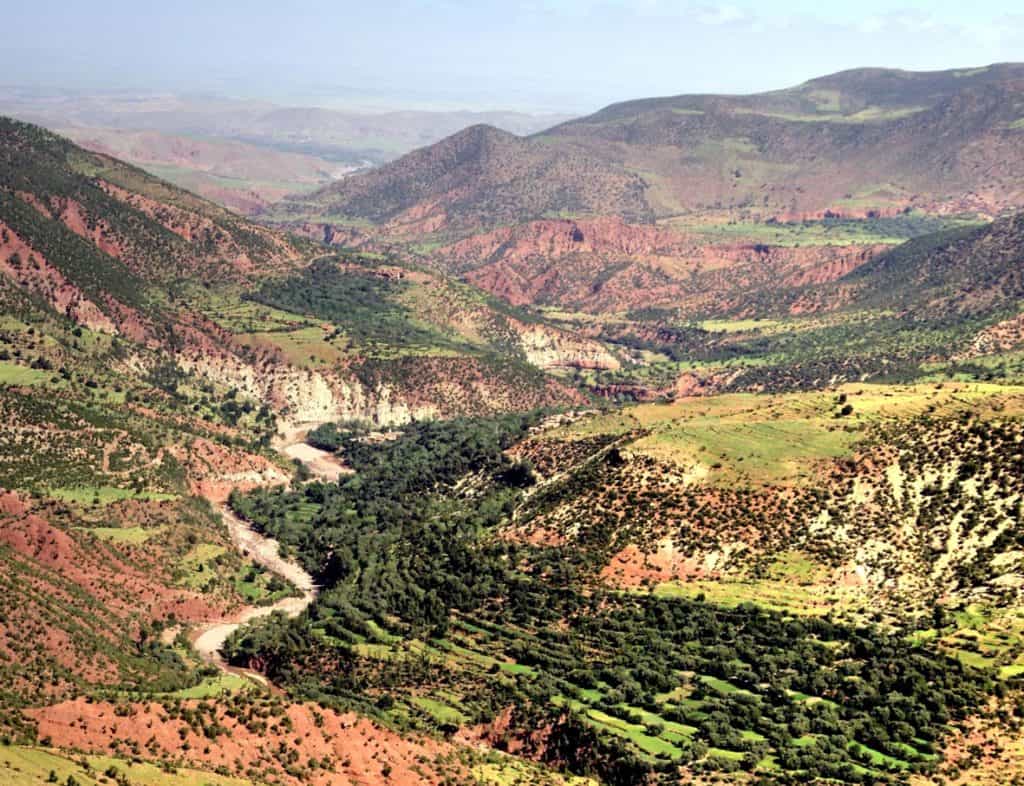 Situated 15 kilometers from the center of the province of Tinghir, the entrance to the High Atlas Mountains, the Todgha Gorge is one of the world’s most spectacular canyons. Carved out by two rivers – the Todgha and the Dades – on their final 40 kilometers stretch through the mountains, the Todgha is the name of the last 600 meters of the canyons. In places, the gorge measures just 10 meters across, but the cliffs are up to 160 meters high on each side. The river has since dried up, leaving only the imagination to picture the powerful natural forces that once carved this region.

Though in a remote area of Morocco, the gorge is becoming increasingly popular among rock climbers. More than 150 routes rated French Grade 5+ to 8 have been bolted in the cliffs and hiking paths and a well-maintained dirt road have been carved out of the rock. Local people live in the area and can be seen with their small donkeys or herding camels and goats. The town of Tinerhir which has a population of just 36,000 permanent residents swells to accommodate tourists in popular holiday months. The town is mostly populated by Amazighs, which is what many Berbers, the indigenous peoples of North Africa, west of the Nile Valley, call themselves. It roughly translates to “free people” or “free and noble men.”

Toubkal is a mountain peak in southwestern Morocco located 63 kilometers south of Marrakech in the Toubkal National Park. At 4,167 meters, it is the highest peak in the Atlas Mountains, Anti-Atlas, North Africa and the Arab World. The mountain is known for its snowy peaks throughout the year and attracts thousands of hikers who usually approach the mountain from the road-end village of Imlil. It is possible to climb the mountain in two days – first day up to the refuge (around seven hours), second day to the summit (around five hours) and back to Imlil (up to five hours). Qualified guides can be hired, as well as porters to carry equipment and food supplies higher into the mountains. For experienced mountaineers, guides are not required for the normal route as it is a moderate hike and orientation is not a problem. Toubkal can be climbed all year-round but from November to May, snow settles above 3,000 meters and crampons and ice axes are required.

Not far from Toubkal is Oukaimeden, Africa’s highest ski resort located at 2,600 meters and its chairlift rising to the peak of Jebel Attar at 3,258 meters. It has all the facilities of a typical European resort – ski hire, ski school, restaurants and hotels – but all done in a uniquely Moroccan way. Donkeys, rather than shuttle buses, wander back and forth between lifts.

Located in the south east of Morocco, an 8-hour drive from Fez in the north, Erg Chebbi is one of Morocco’s two Saharan ergs – large seas of dunes formed by wind-blown sand. The other is Erg Chigaga near M’hamid. Covering an area of 50 kilometers from north to south and up to 10 kilometers from east to west lining the Algerian border, the dunes of Erg Chebbi reach a height of up to 150 meters in places affording spectacular views across this breakaway piece of Sahara. A special feature of Erg Chebbi is its beautiful unique orange colored sand.

Merzouga, the local tourist center, is located near the edge of the dunes. Camel trips from Merzouga are available taking tourists on overnight trips several kilometers into the erg. Erg Chebbi’s proximity to the tourist center has led to the erg sometimes being referred to as “dunes of Merzouga.” During the warmest part of the year, Moroccans come to Erg Chebbi to be buried neck-deep in the hot sand for a few minutes at a time which is considered to be a treatment for rheumatism.

Located near the beautiful and friendly village of Tanaghmeilt, in the province of Azilal, 150 kilometers northeast of Marrakech, the Ouzoud waterfall at 330 feet is the second tallest waterfall in Africa. It was awarded the 2014 Certificate of Excellence by the international travel website, TripAdvisor. Ouzoud means “the act of grinding grain” in Berber and, at the summit of the waterfall, there are a dozen old small mills that are still in use. The bottom of the waterfall is accessible through a shaded path of olive trees. The falls provide visitors with stunning views and strenuous but rewarding experiences for hikers. In the vicinity, green valleys, mills, orchards and a superb circuit of the gorges of the El Abid River are found. The area remains relatively untouched by tourism and provides a peaceful experience for those looking to get away from it all, go swimming in refreshingly cold water, and even play with some curious monkeys.

Often cited as one of the world’s most beautiful beaches, Legzira, located about 150 kilometers south of Agadir, ten kilometers from the city of Sidi Ifni in the southern region of Morocco, is famous for the sunsets punctuated by the rock structures jutting out from the cliffs. Like its other Atlantic counterparts, the 8 kilometers stretch of beach is windy, rocky, and expansive. What originally set Legzira apart were its two mammoth stone arches. Naturally formed after years of erosion, these sedimentary giants jutted out into the perpetually crashing waves and were accessible during low-tide. Sadly, in September 2016, one of the two rock archways collapsed and a pile of red rubble was all that was left. It is not known what caused the collapse, but the movement of the sea could have been a factor. The second, larger arch remains standing further along the beach.

On the road to Immouzer des Ida Outanane, 56 kilometers from Agadir, there is a small rest stop. This is where Paradise Valley, a deep, palm-lined gorge with a river snaking along the base, begins. There’s a 2.7 kilometers walking trail or you can hire a mule to explore the valley’s Berber villages. It’s a good trek but the rewards far outweigh the work with spectacular scenery – mountains, forests, rivers and waterfalls with immense natural turquoise swimming pools. You can sun yourself on the warm rocks, cool off in the plunge pools and spend the day enjoying the untouched natural beauty of this unique location.

From Paradise Valley, a further 20 kilometers of winding mountain road takes you to the village of Immouzer des Ida Outanane, a small regional and market center of the Ida Outanane tribe, as its full name suggests. The village market (souk) is held every Thursday. The local honey is made by bees that browse on wild thyme, lavender and other mountain herbs. There’s also a five-day honey season usually in late July or early to mid-August. Other specialty local products include argon oil, beauty products and intricate skillfully-weaved tapestries.

Morocco’s natural beauty isn’t just above ground. Friouato is North Africa’s largest underground cave system. Located 15 miles south-west of Taza which was founded in the 8th century and is one of the oldest cities in Morocco, the caves are popularly known as the Caves of Hercules. Roman mythology says that on his journey to Hesperiedes’ Gardens, Hercules encountered the mountain that was once a titan named Atlas, who was forced to hold up the sky for all of eternity. It is said that instead of going around the mountain, Hercules simply ran through it, creating the shape that stands today at the Strait of Gibraltar, the connecting point of the Atlantic Ocean and the Mediterranean Sea. The caves are rich in both fascinating folklore and natural beauty. However, if you’re feeling more adventurous, you can hire a guide to venture down into the underground tunnels to see outstanding examples of stalagmites and stalactites.

Saudi gets huge arms deal from China worth $4 billion