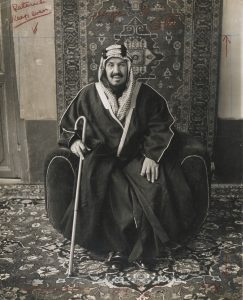 Saudi Arabia’s National Day is celebrated each year on 23 September to commemorate the official establishment of the Kingdom of Saudi Arabia by King Abdulaziz in 1932.

Abdulaziz ibn Abdulrahman ibn Faisal ibn Turki ibn Abdullah ibn Muhammad Al Saud (1875- 1953), often simply referred to as Ibn Saud, was born on 15 January 1875 in Riyadh in the region of Najd in central Arabia. He was the son of Abdulrahman bin Faisal, the last ruler of the emirate of Najd, a tribal sheikhdom centered on Riyadh and referred to by historians as “the second Saudi state”.For 130 years, Ibn Saud’s family, the House of Saud, had controlled much of the Arabian peninsula in the form of the emirate of Diriyah, “the first Saudi state”, until its destruction by an Ottoman army in the early nineteenth century

In 1890, when Ibn Saud was only fifteen, the House of Saud’s rivals, the Rashidis, conquered Riyadh. Ibn Saud and his family took refuge with the al Murrah bedouin tribe in the southern desert of Arabia. Later, the family moved to Qatar where they stayed for two months, followed by a short stop-over in Bahrain and finally Kuwait where they lived for nearly a decade. In the spring of 1901, Ibn Saud and some relatives, including a half-brother, Mohammad, and several cousins, set out on an expedition into Najd to raid tribes associated with the Rashidis. As the raids proved successful, Ibn Saud attracted more followers and the numbers peaked at over 200 before dwindling over the ensuing months. In the autumn, the group made camp at the Yabrin oasis. It was Ramadan and Ibn Saud made a decision to attack Riyadh and retake it from the Rashidis. On the night of 15 January 1902, he led forty men over the walls of the city on tilted palm trees and took the city. The Rashidi governor of the city, Ajlan, was killed in front of his own fortress. The recapture of the city marked the beginning of “the third Saudi state”.

The recapture of Riyadh marked the beginning of three decades of conquests that made Ibn Saud the ruler of nearly all of central Arabia. Many former supporters of the House of Saud rallied to his call to arms. He was a charismatic leader and over the next two years, he and his forces recaptured almost half of Najd from the Rashidis. However, in 1904, the Rashid is appealed to the Ottoman Empire for military assistance and the Ottomans responded by sending troops into Arabia. On 15 June 1904, Ibn Saud’s forces suffered a major defeat at the hands of the combined Ottoman and Rashidi forces. Ibn Saud’s forces, however, were able to regroup and began to disrupt enemy supply routes and force a retreat. In October 1906, the victory of Ibn Saud’s forces at Rawdat Muhanna ended the Ottoman presence in Najd and Qassim.

Ibn Saud completed his conquest of Najd and the eastern coast of Arabia in 1912. He then founded the “Ikhwan”, a military-religious “brotherhood”, which assisted him in his later conquests with the approval their religious scholars (“ulema”). In the same year, he instituted an agrarian policy to settle the nomadic pastoralist bedouinsin to colonies and to replace their tribal organizations with allegiance to the Ikhwan.

During World War I, the British government established diplomatic relations with Ibn Saud through their agent, Captain William Shakespear. In December 1915, the British entered into the treaty of Darina which made the lands of the House of Saud a British protector ate and attempted to define the boundaries of the developing Saudi state. In exchange, Ibn Saud pledged to resume raids against the Rashidis. Meanwhile, the British Foreign Office had begun to support Sharif Hussein bin Ali, the Emir of Hejaz by sending T. E. Lawrence (a.k.a. Lawrence of Arabia) to him. The Ikhwan began to conflict with Hussein in 1917, just as his sons Abdullah and Faisal entered Damascus. The treaty of Darin remained in effect until superseded by the Jeddah conference of 1927 and the Dammam conference of 1952, during both of which Ibn Saud extended his boundaries past the Anglo-Ottoman “Blue Line”. After Darin, Ibn Saud stockpiled the weapons and supplies which the British had provided to him, including a ‘tribute” of £5,000 per month. After World War I, he received further support from the British, including surplus munitions. He launched his campaign against the Rashidis in 1920 and by 1922 they had been all but destroyed. 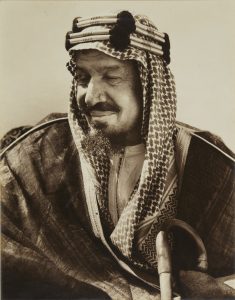 The defeat of the Rashidis allowed Ibn Saud the leverage to negotiate a new and more favorable treaty with the British. While the new treaty, signed at Uqair in 1922 with Percy Cox, the British High Commissioner in Iraq, recognized many of Ibn Saud’s territorial gains, Ibn Saud agreed to recognize British territories in the area, particularly along the Persian Gulf coast and in Iraq. The former of these were vital to the British, as merchant traffic between British India and the United Kingdom depended upon coaling stations on the approach to the Suez Canal.

In 1925, Ibn Saud’s forces captured the holy city of Mecca from Sharif Hussein ending 700 years of Hashemite rule. On 8 January 1926, the leading figures in Mecca, Medina and Jeddah proclaimed Ibn Saud the King of Hejaz. He pronounced Najd as a kingdom on 29 January 1927. On 20 May 1927, the British government signed the treaty of Jeddah, which abolished the Darin protection agreement and recognized the independence of the Hejaz and Najd, with Ibn Saud as their ruler. For the next five years, Ibn Saud administered the two parts of his dual kingdom as separate units.

With international recognition and support, Ibn Saud continued to consolidate his power. By 1928, his forces had overrun most of the central Arabian Peninsula, but the alliance with the Ikhwan collapsed when Ibn Saud forbade further raids. The few portions of central Arabia not under his control had treaties with London, and Ibn Saud was unwilling to provoke the British by pushing into these areas. This did not sit well with the Ikwhan who had been taught that all non-Wahhabis were infidels. Tensions finally boiled over when the Ikwhan rebelled in 1927. After two years of fighting, they were suppressed by Ibn Saud in the Battle of Sabilla in March 1929.

On 23 September 1932, Ibn Saud formally united the Najd and Hejaz into the Kingdom of Saudi Arabia, with himself as its king. In 1938, he transferred his court from the Masmak fortress to the Murabba Palace which continued to be his residence and the seat of government until his death in 1953 at the age of 78.

As in previous years, National Day will see the Saudi capital Riyadh and other major cities in the kingdom decked out in green the color of the national flag. As well as the festivities taking place in the streets special events will be held in hotels, auditoriums and convention centers. On the following page are a few scenes from last year’s celebrations.

Saudi Arabia extends visitor visas for those outsides until November 30

Smartphone shipments are shrinking globally due to inflation.