Bloomberg reported last month that Saudi Arabia plans to spend SAR 120 billion ($32 billion) on subsidized home loans for borrowers, as it seeks to create conditions for an expanded private-sector role in a mortgage market dominated by the government. Housing Minister Majed Alhogail said the kingdom’s new housing program also includes an SAR 18 billion ($4.8 billion) loan-guarantee program to boost access to funding, and SAR 12.5 billion ($3,33 billion) to support home down-payments, all to be spent through 2030, Authorities want to expand the mortgage market by more than 70 percent to reach SAR 502 billion ($133.87 billion) by 2020, largely through increased private-sector participation. Currently, the government provides 65 percent of home loans. “We want to change that completely,” Alhogail said. “It’s a very 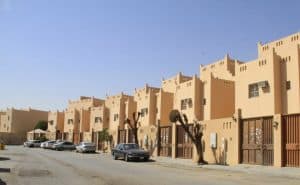 generous program. It’s enabling the private sector, reducing their risk to a certain level.” The new funding is part of a push to lift home ownership among Saudi citizens from 50 percent to 60 percent by 2020. Housing policy is an especially sensitive plank of Crown Prince Mohammed bin Salman’s economic transformation plan, Vision 2030 as many Saudis say they’re unable to afford homes or obtain financing.

The government will monitor conditions and adjust policies “to ensure there is no bubble” in the housing market. “As you know, when you launch a very strong program like this, you expect the price could increase,” Alhogail said “You could expect more defaults, because you are lending to people who don’t have steady income”. The kingdom wants to build 125,000 housing units in 2018, compared to 110,000 last year, add a total of 480,000 housing units by 2020 and 1.2 million by 2030. Meanwhile, demand for real estate financing in the kingdom is expected to increase from SAR 279.75 billion ($74.6 billion) in 2017 to SAR 500 billion ($133.3 billion) in 2026. Launched in September in partnership with the Ministry of Housing, the Saudi Real Estate Refinance Company (SRC) will stimulate housing sector development in the kingdom by injecting liquidity into the real estate market. It is anticipated SRC will refinance up to SAR 75 billion ($20 billion) for the kingdom’s housing sector over the next five years, reaching SAR 170 billion ($45.3 billion) by 2026. The company will act as an intermediary access point for investors, aligning the liquidity, capital, and risk management requirements of real estate mortgage companies, with the risk acceptability and return on equity to meet investor targets