Now in its 10th edition, the annual ASDA’A Burson-Marsteller Arab Youth Survey is one of the most important pieces of research produced in the Middle East and North Africa offering unique insight into the attitudes and aspirations of the region’s biggest demographic – its youth. Here are just some of the findings of this year’s survey.

This year’s survey conducted by international polling firm, PSB Research, explored attitudes among young Arab men and women in the age group 18 to 24 in the six countries of the Gulf Cooperation Council (Bahrain, Kuwait, Oman, Qatar, Saudi Arabia and the UAE), North Africa (Algeria, Egypt, Libya, Morocco, and Tunisia), the Levant (Iraq, Jordan, Lebanon and the Palestinian territories) and Yemen. The survey did not include Syria due to the political situation in the country. PSB conducted 3,500 face-to-face interviews from January 21 to February 20, 2018. There were 200 respondents for each country, except for the UAE, Saudi Arabia and Egypt with 300 respondents each, and Iraq with 250 and the Palestinian territories with 150. The gender split of the survey was 50:50 male to female. 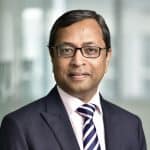 As noted in the introduction to the survey by Sunil John, the founder of ASDA’A Burson-Marsteller and President (Middle East) of Burson Cohn & Wolfe, the Middle East and North Africa is a young region where 65 percent of the population is under the age of 30. What young people think about their futures, their careers, their families, their governments; their role models, what media they consume and how they wish to spend their money should be important to every government, every business and every institution in the region. 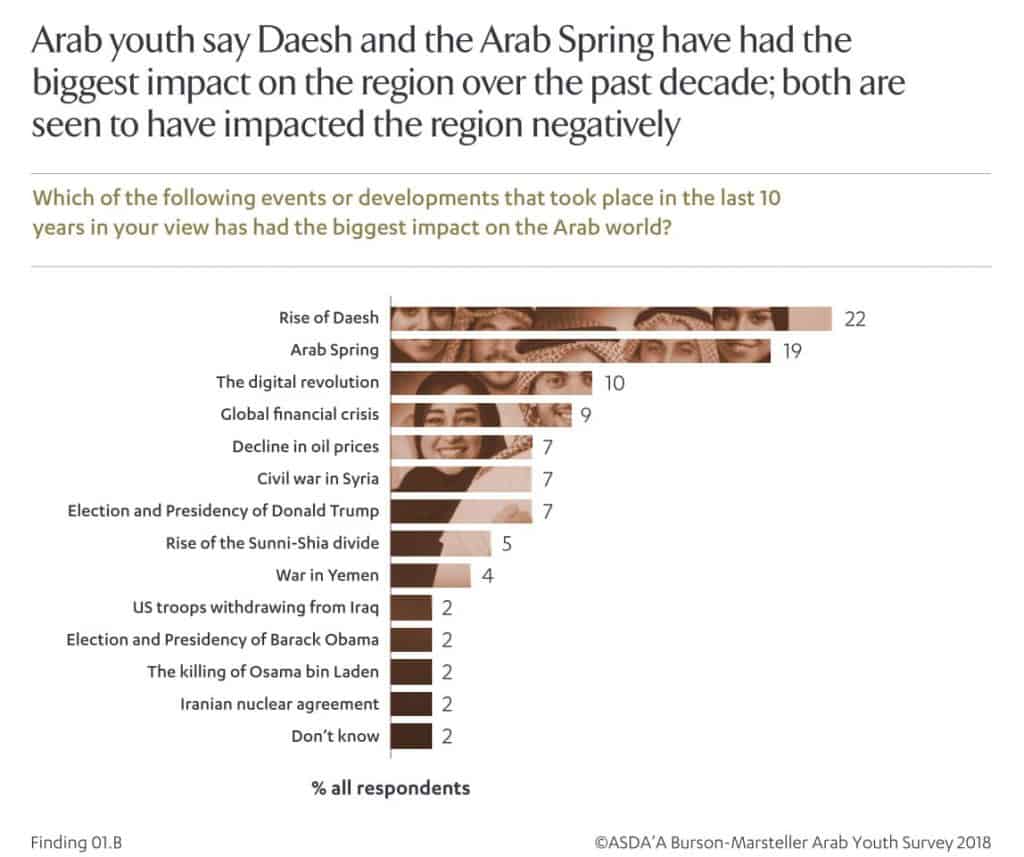 In the past decade, the region has moved in the wrong direction

Action is needed on jobs, education, corruption and terrorism

The survey shows that young Arabs are very clear about what needs to be done to move the region in the right direction. Defeating terrorism (34 percent)is cited as a top priority more frequently than any other issue.

In the GCC, 41 percent of respondents say the fight against terror is a top priority, significantly higher than their peers in North Africa (31 percent) and the Levant (29 percent). Employment is cited as the second most important consideration, with 30 percent of the respondents citing the creation of well-paid jobs as a top priority. Modernizing the education system comes in at third place while cracking down on government corruption is considered as the fourth most pressing concern. 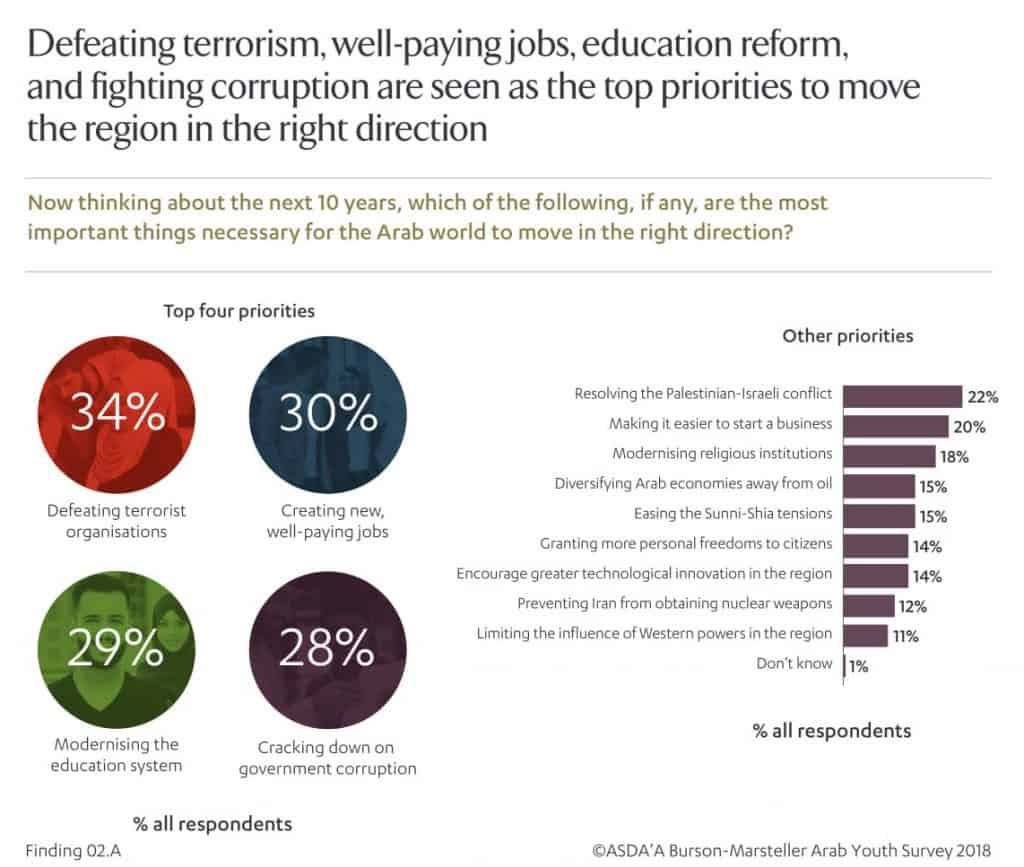 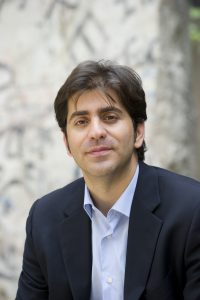 Commenting on these findings, Afshin Molavi, a senior fellow at the Foreign Policy Institute of the Johns Hopkins University School of Advanced International Studies in Washington DC says the region has come a long way from the “heady days of Tahrir Square”, when a new world seemed to be dawning. The “great shift” that the Arab uprisings had promised had instead led to a “great drift” Young people overwhelmingly reject terrorist groups, like Daesh. Young people want greater government accountability and transparency. They want jobs. They want modernized education systems. They want opportunity. They prefer to stay in their home country and build it, rather than leave. They want hope. They want dignity“There has been too much hesitation” writes Molavi. “Arab governments have largely failed their youth, and their “revolutions” have been disappointing, but I will not bet against the promise of Arab youth. There is a moment, today, without hesitation, when the promise of Arab youth can be channeled into results”. 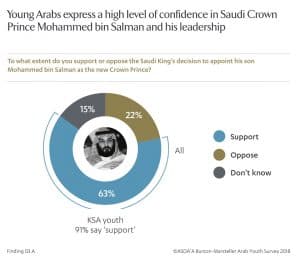 Young Arabs throughout the Middle East and North Africa express a high level of confidence in crown prince Mohammed bin Salman. 63 percent of respondents say they support his appointment as crown prince. A similar number (64 percent) believe he is a strong leader, while nearly 59 percent say he will steer Saudi Arabia in the right direction. Support for the crown prince among Saudi youth is overwhelming, with a massive 91 percent of young Saudis supporting his appointment, 97 percent considering him a strong leader, and 90 percent saying he will move the country in the right direction. A similar number, (94 percent), also support the crown prince’s recent anti-corruption drive targeting business leaders and senior members of the royal family. 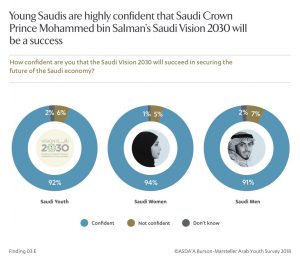 More than 92 percent say they are confident that the crown prince’s Vision 2030 program of social and economic reforms will be a success. Arab youth as a whole also support the Crown Prince’s anti-corruption campaign, with 86 per cent saying they are in favour of the campaign. Backing for the campaign is strong across the region, with 89 percent of youth in the GCC, 85 percent in North Africa, and 83 percent in the Levant expressing support for the crackdown. When asked which leader will have the biggest impact on the Arab world over the next decade, the crown prince is cited more frequently than any other Arab leader. 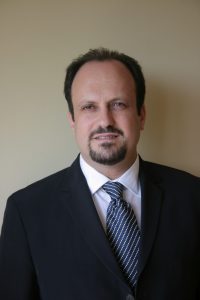 Bernard Haykel, a professor of Near Eastern Studies at Princeton University, where he is also director of the Institute for the Transregional Study of the Contemporary Middle East and the Program in Near Eastern Studies, says the crown prince “has given voice to the frustrations of the young generation with the status quo, and this explains, in part, why so many are supportive of his policies” However, notes Haykel, the extraordinarily high numbers in favor of the crown prince and his reforms are nonetheless fraught with danger. They signal very high expectations among the youth about the changes the crown prince can generate and the results he must deliver. Diversifying the economy is a generational challenge and will take more than a decade to complete. “There is no doubt that a generation of Saudis will face hardship and may never attain their aspirations: says Haykel. “Therefore, it is important to find the means to reset their expectations and to explain that their hard work and sacrifice is necessary for future generations to have it better.” 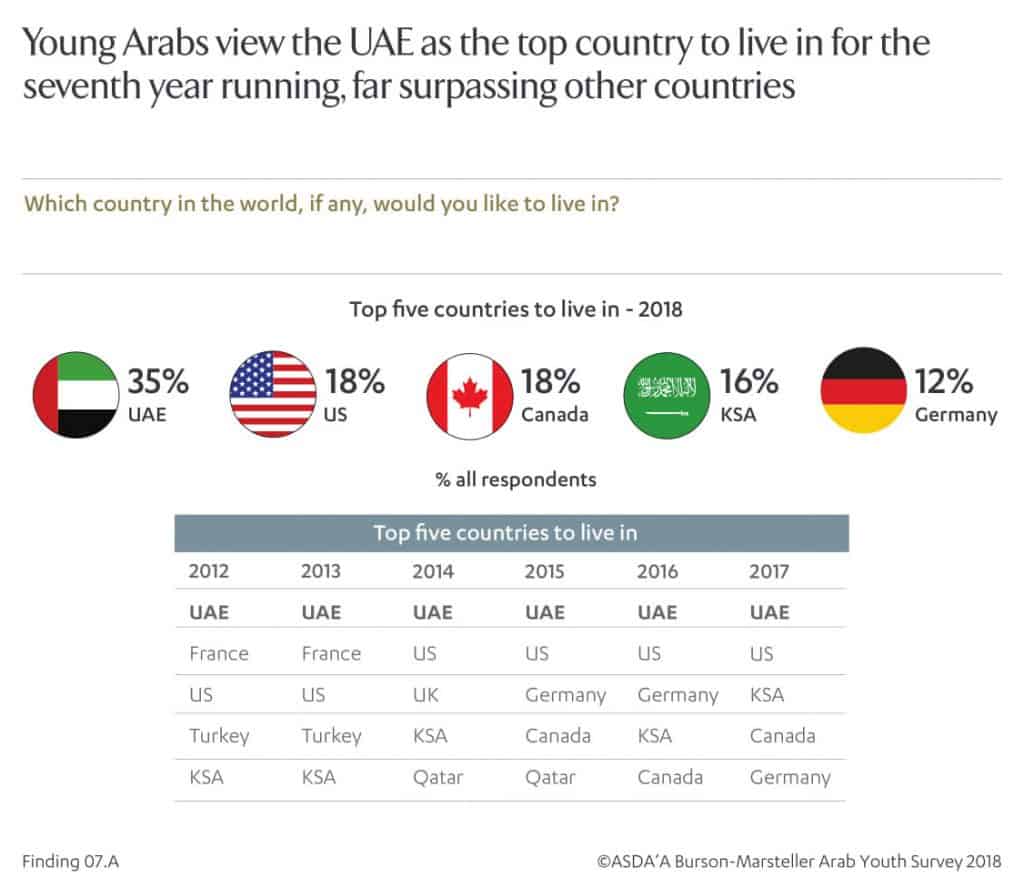 The UAE is the top country to live in.

For the seventh year running, the United Arab Emirates retains its position as the country most young Arabs would like to live in and would most.

35 percent of respondents, the same number as last year, cited UAE as the country they would most like to live in. followed in joint second place by the United States and Canada with both selected by 18 percent of respondents. These were followed by Saudi Arabia (16 percent) and Germany (12 percent). Asked which country they would like their own country to emulate, the UAE again is far ahead of other countries, with more than a third of young Arabs saying the UAE is a model country for their own. The US and Canada are again tied in second place (17 percent) followed by Japan, a new entry in the top five, with 15 percent and Germany with 13 per cent. As in previous years, the UAE is primarily associated with safety, security, strong career opportunities and well-paying jobs in a region facing security and economic concerns. 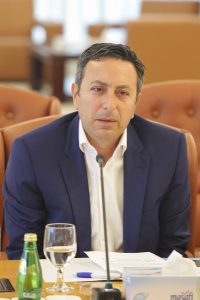 Raed Barqawi, the editor-in-chief of Al Khaleej newspaper, says a dedication to youth is not a recent development in the UAE. It stems from the vision that has been guiding the country since its very inception, set out by the UAE’s founding father, the late Sheikh Zayed bin Sultan Al Nahyan. One concrete example of the UAE’s successful approach, he continues, is education which is held in the highest regard in the UAE. The country provides its youth – both citizens and residents – with a range of high quality academic opportunities at home and abroad.

The digital revolution has shaped the region over the past decade 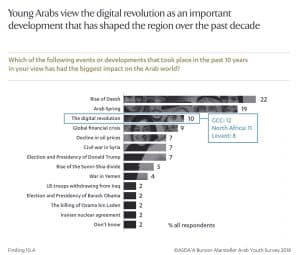 Across the region, one in ten young people cite the digital revolution as the most important development in the region over the past decade, placing it as the third most significant event overall, behind the rise of Daesh (22 percent) and the Arab Spring (19 percent).

60 percent of respondents say the digital revolution has had a positive impact on the region, compared to only 17 percent who say the impact has been negative. Technology (18 percent) emerges as the top sector among those in which young Arabs would consider starting a business, surpassing retail (15 percent) and real estate (14 percent) which ranked top in previous years. Similarly, 52 percent of young Arabs say they use online banking services (29 percent on a monthly basis) while 48 percent say they have never used online banking. That said, the survey says more needs to be done to develop the digital ecosystem to ensure young people are able to convert this into a career or business opportunity. Google reported in April 2018 that 200 million people in the Middle East and North Africa, almost half the population, are still not connected to the internet, while a recent study by the World Economic Forum states that one in five jobs in the Arab world will require digital skills that aren’t widely available in the region today. 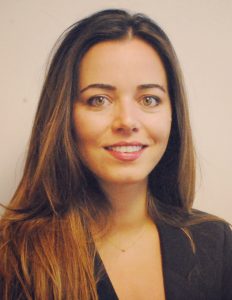 Maysam Ali, assistant director of the Stevens Initiative, an international public-private partnership that connects youth in the United States and the Middle East and North Africa through online educational programs, says that ineffective education systems have helped contribute to the Arab world’s 25 percent youth unemployment rate, the highest in the world. Ali notes that the Arab world’s first wave of digital transformation in education, employment, entertainment and enterprise has helped to address problems exacerbated by both governmental inadequacy and excessive government regulation. While the next wave of digital transformation including artificial intelligence, cloud computing, and virtual reality offers a promising sign of what’s to come, Ali quotes the old Arab proverb “a single hand cannot clap”. Success is a team effort, she says, and both Arab business and Arab governments must rise to the challenge.

America sues Google with the largest lawsuit in two decades