HOW ARTIFICIAL INTELLIGENCE MAY SOON BE ABLE TO SOLVE PROBLEMS

Researchers at DeepMind which is owned by Google parent company, Alphabet, have used puzzles known as “Raven’s Progressive Matrices” to test AI’s ability to solve problems. Developed by John C. Raven in 1936, the tests measure the ability to make sense and meaning out of complex or confusing data. They also test the ability to perceive new patterns and relationships and to forge largely non-verbal constructs that make it easy to handle complexity. In a recent interview with New Scientist magazine, Deep Mind’s David Barrett said “Abstract reasoning is important in domains such as scientific discovery where we need to generate novel hypotheses and then use these hypotheses to solve problems”

AI systems rely on artificial neural networks (ANNs), which try to simulate the way the brain works in order to learn. ANNs can be trained to recognize patterns in information including speech, text data, or visual images and have been the basis for many developments in AI over recent years. Conventional AI uses input to “teach” an algorithm about a particular subject by feeding the AI system massive amounts of information. Practical applications include Google’s language translation services, Facebook’s facial recognition software and Snapchat’s image altering live filters. However, the process of inputting the data can be extremely time consuming and is limited to one type of knowledge. A new breed of ANNs called Adversarial Neural Networks allows systems to learn from each other. This approach aims to speed up the process of learning, as well as refining the output created by AI systems.

The puzzles in the DeepMind tests involved a series of seemingly random shapes which needed to be studied in order to determine the rules that dictate the pattern. Once the rules of the puzzle are determined, the next shape in the sequence can be predicted. Human candidates can prepare for such a test by learning the types of rules used to govern the patterns. Rather than using abstract thought, humans are using knowledge they have learned. This is not the case with AI which uses neural networks fed with vast amounts of data to learn and can easily be taught to identify patterns without needing to employ abstract thinking. The researchers tested a range of standard neural networks on a single property within a matrix but not all of the possible properties. The AI systems performed poorly – as low as 22 per cent. However, a specially designed neural network that could infer relationships between different parts of the puzzle scored the highest mark of 63 percent. 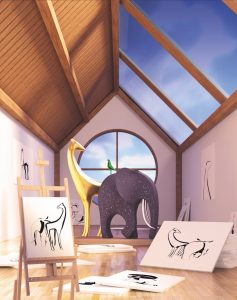 DeepMind’s co-founder and CEO, Demis Hassabis, recently announced that AI can now actually dream an entire world based on a single photo. The intelligent system called “Generative Query Network”developed as part of the DeepMind program, has taught itself to visualize any angle on a space in a static photograph. This allows the algorithm to generate three-dimensional impressions of spaces it has only ever seen in flat, two-dimensional images. It gives the machine a “human-like imagination”.

With Generative Query Network, Dr. Hassabis and his team are trying to replicate the way a living brain learns about its environment simply by looking around. This is a very different approach to most projects, in which researchers manually label data and slowly feed it to the AI. To train the DeepMind neural network, the team showed the AI a carousel of static images taken from different viewpoints on the same scene. By using these images, the algorithm was able to teach itself to predict how something would appear in a new viewpoint not included in the images. The machine soon learnt to imagine complete three-dimensional representations of the scene. The machine is even able to move around its imagined space. As it moves, the algorithm must constantly make predictions about where the objects initially seen in the photos should be, and what they look like from its ever-changing perspective.

The full findings of the DeepMind tests are awaiting peer-review but can be viewed on the pre-print repository Arxiv.

Saudi Foreign Minister: we support Palestine and do not have relations with Israel