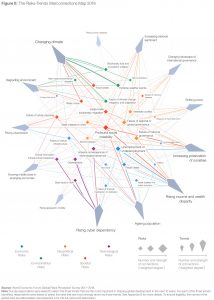 According to The Global Risks Report 2018, published last month by the World Economic Forum ahead of the Davos summit, the prospect of strong economic growth in 2018 presents leaders with an opportunity to address
weaknesses in many of the complex systems that underpin our world.

As the pace of change accelerates, and as risk interconnections deepen, this year’s report highlights the growing strain on many of the systems on which the world relies and, in particular, on four key areas: the environment, cybersecurity, the economy and geopolitics.

Noting that environmental risks have grown in prominence in recent years, the report says this trend has continued with all five risks in the environmental category being ranked higher than average for both likelihood and impact over a 10-year horizon. This follows a year characterized by high-impact hurricanes, extreme temperatures and the first rise in CO2 emissions for four years. The planet continues to be pushed to the brink and the damage is becoming increasingly clear. Biodiversity is being lost at mass-extinction rates, agricultural systems are under strain and pollution of the air and sea has become an increasingly pressing threat to human health. The reports suggests that a trend towards nation-state unilateralism may make it more difficult to sustain the long-term, multilateral responses that are required to counter global warming and the degradation of the global environment.

Cybersecurity risks are also growing, both in their prevalence and in their disruptive potential. Attacks against businesses have almost doubled in five years, and incidents that would once have been considered extraordinary are becoming more and more commonplace. The financial impact of cybersecurity breaches is rising, and some of the largest costs in 2017 related to ransomware attacks, which accounted for 64% of all malicious emails. Notable examples included the WannaCry attack—which affected 300,000 computers across 150 countries—and NotPetya, which caused quarterly losses of US$300 million for a number of affected businesses. Another growing trend is the use of cyberattacks to target critical infrastructure and strategic industrial sectors, raising fears that, in a worst-case scenario, attackers could trigger a breakdown in the systems that keep societies functioning.

The report says headline economic indicators suggest the world is finally getting back on track after the global crisis that erupted 10 years ago, but this upbeat picture masks continuing underlying concerns. The global economy faces a mix of long-standing vulnerabilities and newer threats that have emerged or evolved in the years since the crisis. The familiar risks include potentially unsustainable asset prices, with the world now eight years into a bull run; elevated indebtedness, particularly in China; and continuing strains in the global financial system. Among the newer challenges are limited policy firepower in the event of a new crisis; disruptions caused by intensifying patterns of automation and digitalization; and a build-up of what the report describes as “mercantilist and protectionist pressures against a backdrop of rising nationalist and populist politics.”

The world has moved into a new and unsettling geopolitical phase. Multilateral rules-based approaches have been fraying. Re-establishing the state as the primary locus of power and legitimacy has become an increasingly attractive strategy for many countries, but one that leaves many smaller states squeezed as the geopolitical sands shift. There is currently no sign that norms and institutions exist towards which the world’s major powers might converge. This creates new risks and uncertainties: rising military tensions, economic and commercial disruptions, and destabilizing feedback loops between changing global conditions and countries’ domestic political conditions. International relations now play out in increasingly diverse ways. Beyond conventional military build-ups, these include new cyber sources of hard and soft power, reconfigured trade and investment links, proxy conflicts, changing alliance dynamics, and potential flashpoints related to the global commons. Assessing and mitigating risks across all these theatres of potential conflict will require careful horizon scanning and crisis anticipation by both state and non-state actors.

Commenting on the report Professor Klaus Schwab, Founder and Executive Chairman of the World Economic Forum said: “A widening economic recovery presents us with an opportunity that we cannot afford to squander, to tackle the fractures that we have allowed to weaken the world’s institutions, societies and environment. We must take seriously the risk of a global systems breakdown. Together we have the resources and the new scientific and technological knowledge to prevent this. Above all, the challenge is to find the will and momentum to work together for a shared future.” 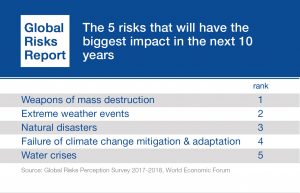 In its annual Global Risks Perception Survey (GRPS) nearly 1,000 experts were asked for their views about the trajectory of risks in 2018. The findings suggest that experts are preparing for another year of heightened risk with nearly 59% of their answers pointing to an intensification of risks, compared with 7% pointing to declining risks. A deteriorating geopolitical landscape is partly to blame for the pessimistic outlook with 93% of respondents saying they expect political or economic confrontations between major powers to worsen and nearly 80% expecting an increase in risks associated with war involving major powers. However, as in 2017, the environment appears by far to be the greatest concern. Among the 30 global risks the experts were asked to prioritize in terms of likelihood and impact, all five environmental risks – extreme weather; biodiversity loss and ecosystem collapse; major natural disasters; man-made environmental disasters; and failure of climate-change mitigation and adaptation – were ranked highly on both dimensions. Extreme weather events were seen as the single most prominent risk. According to the GRPS, cyber threats are growing in prominence, with large-scale cyberattacks now ranked third in terms of likelihood, while rising cyber-dependency is ranked as the second most significant driver shaping the global risks landscape over the next 10 years. Economic risks, on the other hand, feature less prominently this year, leading some experts to worry that the improvement in global GDP growth rates may lead to complacency about persistent structural risks in the global economic and financial systems. Even so, inequality is ranked third among the underlying risk drivers, and the most frequently cited interconnection of risks is that between adverse consequences of technological advances and high structural unemployment or under-employment 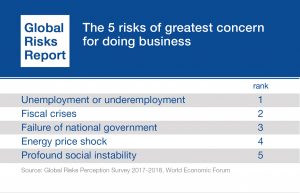 In a new series called “Future Shocks”, the report presents 10 short “what-if” scenarios, not as predictions but as “food for thought” to encourage world leaders to assess the potential future shocks that might rapidly and radically disrupt their worlds:

The death of trade: Trade wars cascade and multilateral institutions are too weak to respond

Into the abyss: Another financial crisis overwhelms policy responses and triggers period of chaos Inequality ingested: Bioengineering and cognition-enhancing drugs entrench gulf between haves and have-nots 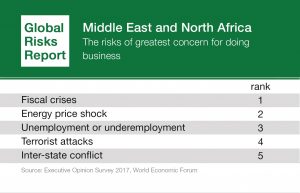 Walled off: Cyberattacks, protectionism and regulatory divergence leads to balkanization of the internet